Understandably, the national press can’t devote every column inch on their football pages to Liverpool FC, just as the national broadcast media can’t cover the Reds for every minute of their sports bulletins.

And at this time of year, when they talk about any team in the top flight, the topic they feel compelled to discuss is the transfer window. And they needed to leave plenty of headroom for Steve Bruce’s rant (if they called it a rant) about the departure of Darren Bent.

People don’t gossip over the garden fence about what they saw through an open window any more, instead they find themselves paying a little too much money to watch twin-phoned gadget operators gossiping over a touch-screen instead.

With the window open for such a short time it’s important to maintain the fall-back option of the managerial sack-list, so any room not taken up by transfer speculation is filled with speculation about the future of various managers.

With all this in mind it’s little wonder that the portions of Kenny Dalglish’s latest press-conference selected for publication related to the transfer window and his own future as Reds boss long-term. They weren’t the only questions he was asked, but little else made the cut by the time the various editors had got their scissors out.

One answer they cut out was an unprompted and heartfelt tribute to Rafael Benítez from Kenny. Not a single word of it would hit the back pages, even in the local papers. Kenny had been asked about the club’s youth sides: “I wouldn’t go and say there are any kids who played in the Youth Cup against Crystal Palace who are going to be in the first team yet, but the progress at the Academy in the last year and a half has been absolutely fantastic,” enthused Kenny.

“That’s great credit to Rafa who brought in Pepe Segura, Rodolfo Borrell and Frank McParland,” said Kenny. “He reorganised the whole Academy and you can see the benefit in the kids now.

Praise is one thing, but Kenny knows how important it is for feet to be kept on the ground, particularly with the younger players: “The reserve team’s average age has been drastically reduced. Whether we get them through or not, we’d never put that pressure on them, but we’re clearly encouraged by the work that’s being done there and it’s a work in progress.”

But the message he sent out about Rafa and his changes to the Academy were clear. Kenny not only approved, he thought they were fantastic.

Rafa fought for changes that he felt were best for the club’s long-term good, changes that would result in resentment and bitterness from those who had perhaps not been performing as well as they should be at a club like Liverpool. To those who forgot that the club should come first, it was like an outsider was interfering with their safe little world.

With the club under the shadow of its feuding owners, Hicks and Gillett, that resentment and bitterness would be used by some to help fight their own battles, to recruit followers to their own cause – self-preservation.

Those battles meant it took far longer than it should have done for Rafa’s ideas to be either put into place or rejected. As with so much during the reign of the previous owners the big decisions were never made, they were just postponed until tomorrow. Tomorrow, like those shovels, never came.

It wasn’t until Rick Parry announced his departure that a decision was finally made to review the Academy set-up in detail. The Academy had become almost like a separate entity in its own right, and the distance between it and Melwood had been growing wider. 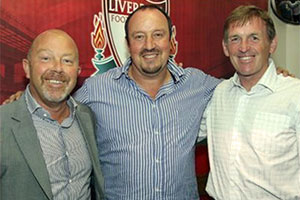 Frank McParland was given the task of undertaking a strategic review of the Academy in March 2009, before being made Academy director in the summer. After his appointment he explained there would be “changes in both personnel and the way we do things at the Academy, but uppermost in our minds is the need to provide the best possible environment for the future development of all our young footballers.”

McParland also explained that there was a conscious effort being made to end the division between the Academy and the rest of the club: “It has been decided that separate branding for the Academy will no longer be used. The Academy is an integral part of the club and will now be badged accordingly. It has a hugely important part to play in the future success of Liverpool FC and the change reflects that fact.”

The key message was one of unity, of working together. McParland explained: “There will be much closer liaison between Melwood and the Academy, and Rafa himself has been hugely supportive of the direction in which we want to move forward.”

Many will argue that the unity took a battering during the brief reign of Roy Hodgson. But few will dispute that Kenny Dalglish is working hard to bring it back. That much was made clear by McParland this week, when he told the official site about Kenny’s visit to the Academy on Monday: “He told us that he is focused on spreading the message that this is ‘one club’ and is very keen for us to get together with the staff from Melwood to actively talk about our young players.

“He wants to get down here as much as possible.”

McParland said Kenny had “assured the players that there would be big opportunities ahead for them to be involved in first-team training sessions and that some of them will be going away with the first-team for league games so they can sample the experience of it all.”

It was after that meeting that Kenny took Conor Coady and Suso to Melwood to train with the first team. The following day Kenny sat in the dugout as the under-17s played a friendly against Shrewsbury.

Only time will tell if Rafa’s changes at the Academy pay off for the club, but the early signs suggest they will.

Time will also tell just how important one of Rafa’s other fights was for the club. It was Rafa who fought for Kenny Dalglish to be brought back to Anfield in the first place, a return that gave Kenny a vital 18 months as part of the club’s set-up ahead of taking on the job of manager once more.

And if it does pay off, if Liverpool are finally back on the road they should never have left, there’ll be few people happier than Rafa Benítez about that.

That’s a situation that some people, non-Liverpool people, maybe don’t want to think about.