It genuinely seems a lifetime ago now that Liverpool were embarrassed by Blackpool at Anfield, as supporters showed for what we hope is one last time their complete disgust at the club’s ‘custodians’. 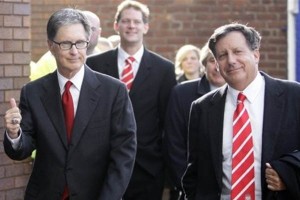 The new ‘stewards’ are NESV, and despite suggesting otherwise on Friday they’ve decided to turn up for today’s game – the first senior match under their control.

It’s being played across the park, at Goodison, and as such is a good chance for NESV to see exactly why “the friendly derby” is a phrase as far from reality as Tom Hicks’ “net spend” claims.

Now we are talking about football again it’s good to see NESV show some public support for Roy Hodgson. But whatever time NESV might have in mind for him, one win in seven games and the worst start in 57 years means Hodgson has very little time left as far as supporters are concerned.

It might be a derby, it might be following on from an international week, but the excuses are wearing thin.

And the biggest excuse of all – the ownership mess – has gone.

11 thoughts on “Back to football – Everton v Liverpool”