A different kind of enemy to Liverpool fans has just reappeared on the scene, and it’s almost a welcome sight. the independent witness wearing a somewhat ruffled look that night, claiming later: “The linesman scored the goal. No-one knows if that shot went over the line and you must be a hundred percent.” We were.

Mourinho’s not in charge now, but knows who he wants to win: “I don’t know who will win. I think always between big teams the result is a question mark. I want Chelsea.”

He also wants them to win the league: “Mathematically it’s possible. I want them to win. Yes, for the fans, for the players, yes, for the friends I have in the club. And when I say friends I include the board. I have no problems with Peter or Roman. I always support my friends.” 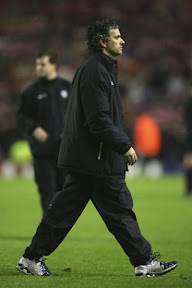 Avram Grant wasn’t happy with the squad Mourinho left behind, but Mourinho’s response was to the point: “I don’t care what Avram Grant says.”

It’s nice of Jose to back his old club. The last time a former Chelsea manager backed his successor for success against Liverpool in a Champions League semi it was the Reds who got to the final. Back in 2005, Claudio Ranieri said: “I think Chelsea have more chances because they are used to being in this position but they must be careful. Liverpool are strong in the Champions League.”

How right those words turned out to be. The bit about Liverpool being strong, rather than who would get through.

And we all know what happened next.