Liverpool FC returned to pre-season training yesterday ahead of their flight to Asia on Sunday for their forthcoming pre-season tour and it’s safe to say that some of the faces at pre-season training will be less popular than others should they be part of the travelling party for the tour. 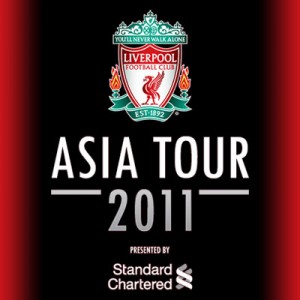 It’s also safe to say that there will be huge disappointment at the absence of one face in particular. Liverpool’s club captain, Steven Gerrard, will remain back at Melwood as he continues his recovery from two groin operations at the tail end of last season. The medical staff at the club have decided it is in the club and player’s best interests that he continue his rehabilitation programme rather than risk travelling to China, Malaysia and Singapore with the rest of the squad.

Reds boss Kenny Dalglish told the official tour site that the captain is making good progress on his recovery but that the priority has to be getting him fully fit for the new season:  “Steven and the medical team have done fantastically well so far and they are in the final stages of getting him back to full training. I’m sure there will be supporters disappointed that Steven is unable to be with us in Asia, but I’m sure the same people will appreciate the importance of Steven giving himself the best possible opportunity of being fit to play against Sunderland on the opening day of the new campaign. Steven continuing his rehabilitation programme at Melwood is in everybody’s long term interests.”

Gerrard also spoke about the decision, admitting that he is disappointed to miss out: “I’d really been looking forward to travelling out to China, Malaysia and Singapore and meeting first hand as many of our fans as possible, and I’m really sorry that I won’t now be able to do that. All of us at the Club realise the incredible support we enjoy in these countries and how much it means to our supporters there. But after sitting down and talking with the medical experts and technical staff, it’s been decided that the best course of action is for me to continue my rehabilitation programme at Melwood. It’s disappointing I won’t be with them, but I’m sure the lads who go out there will put a great show on for our fans.”

The anticipation in the region for the visit of the club is huge with supporters desperate to see the heroes that in many cases they will probably never get to see play at Anfield. That doesn’t stop them dreaming of making that trip and this tour gives them a little taste of what that would bring – and like any fixture there’s never a guarantee of which players will be fit and selected to play.

Other than that Liverpool intend to take a full squad out on the tour although it remains to be seen which of the players considered to be ‘deadwood’ will join them. For what seems to be the first summer in years there are no rumours of a major star looking to leave or be sold although there is still little visible movement in recruiting more stars to the ranks.

Liverpool’s next known targets are Charlie Adam and Stewart Downing, both players believed to be desperate to join the Reds but with both their clubs refusing to cave in for the amounts Liverpool have indicated they will pay. For now it remains a waiting game, all concerned waiting to see who will concede first in a stand-off that should ultimately favour Liverpool.

In many ways just as important as bringing new talent in is the need to offload some of those players that are, to put it as kindly as possible, stuck out on the fringes of the first team. Some of the players that were almost certainly welcomed back through gritted teeth include Milan Jovanovic, Paul Konchesky, Christian Poulsen and Philip Degen. Alberto Aquilani has made the right noises should his return to Anfield turn out to continue after the closure of the transfer window following Kenny Dalglish comments to the same effect but it’s unlikely either would object to a move elsewhere should the terms be suitable.

The one big signing of the summer so far is Jordan Henderson and although the midfielder was allowed a later start to pre-season than the bulk of the squad he is expected to take part in the Asian tour.