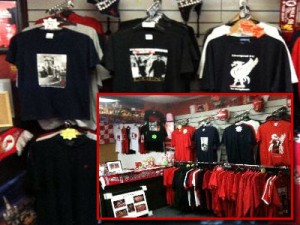 As good as the official merchandise might be it’s never truly replaced everything that was available before they got their act together. Mick Deane is a Liverpool fan – lucky enough to have had a season ticket since 1978 – and he knew the club’s official offerings weren’t always quite what he wanted at the prices he wanted to pay. He also knew he wasn’t alone in thinking that way and decided to try and remedy that himself. At the start of the 2010-11 season he opened his own shop – Hat Scarf or a Badge – and gave supporters access to products the club wouldn’t, couldn’t or shouldn’t sell.

Mick’s only missed two home games since getting that season ticket, including friendlies, and says: “I’d often go into the club shop looking for t-shirts and so on but couldn’t find anything that appealed to me at a decent price.

“Speaking to other lads that go to the game,” he explains, “they had the same problem. So I decided to give it a go and create some designs.”

The t-shirts are produced in limited numbers, perhaps fifty to a hundred, and sell quickly. Mick says, “We try to be different, but we also stock a range of scarves, hats and badges as well as books and DVDs by local Liverpool writers.” Although conscious of keeping prices down, Mick says quality isn’t sacrificed to do so.

Numerous other LFC items are available in the shop which has grown in popularity over the season. “We have been described by some of our customers as ‘a little Aladdin’s cave’ and have built up a regular customer base,” explains Mick.  “We have fans coming in from Singapore, Malaysia, Guernsey – as well as locals who can now buy a good-quality t-shirt at a reasonable price.”

Hat Scarf or a Badge are also the only official stockist of Spirit of Shankly t-shirts and merchandise.

The shop is a couple of minutes’ walk from the stadium, at 371 Walton Breck Road by the Flat Iron pub. At the moment it’s only open on matchdays (from a few hours before kick-off until an hour after) but orders can also be made anytime through the shop’s website, “worldwide delivery is available and most UK orders are delivered next day”.

Mick has one hope for next year that all Liverpool fans will identify with: “We’re looking forward to this time next season when hopefully we’ll be selling Premier League winners’ t-shirts!”