This Europa League match is being described by some as a “nothing game”, but try telling that to the kids who’ll be making a rare or even first visit to Anfield to watch a first team fixture. 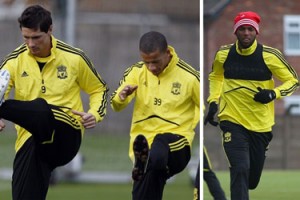 Try also saying that to the players who are getting a rare or first start in this game – including Nathan Eccleston who gets his first ever start for the Reds first team.

The result of tonight’s match has no bearing on the final outcome of the group but thanks to a gesture from the club’s new owners a good turnout is expected – adults paying the cut-price £20 admission cost could get up to four free child tickets at the same time.

As expected Jonjo Shelvey starts, as Roy explained earlier in the week: “It is a good chance to give some players a run out. It’s a good chance for Jonjo to show what he can do again. He’s played a lot of European games and done very well but it’s also a chance for Ryan Babel.”

Both players start tonight but Roy seems to have had a change of mind since that interview. He said at the time: “Fernando Torres will be involved in the game, as will Pepe Reina and our centre-backs. Pepe Reina likes to play, he would like to play in this one and I’m not going to be the one who says to him, ‘You want to play, so you don’t play.’ So he will start the game and Brad Jones will be the second goalkeeper.”

Although Torres is on the bench Reina doesn’t make the 18 at all, meaning sub-keeper Brad Jones gets a rare start.

Pepe’s absence, alongside the continued absence of the captain and vice-captain, means there’s yet another name wearing the captain’s armband tonight. The honour goes to Martin Skrtel this time, the only man to keep his place from the side that were so embarrassingly beaten at St James’s Park on Sunday,

Ten changes but from what Roy said earlier in the week he doesn’t feel it’s a weak side he’s sending out: “We’ll have a strong team and I am sure Utrecht will have a strong team. They seem to play what they consider to be their best team in all of their matches, both European and domestic. We, by contrast, have actually fully utilised our squad, particularly in our European matches.”

It’s good to see Martin Kelly getting another start so soon after signing a new contract and there’s also an opportunity for Fabio Aurelio, missing with injury for most of the season, to get some match-fitness. Christian Poulsen, hardly a success so far since Hodgson brought him in from Italy, has an opportunity to show he’s not quite as bad as he’s made out to be.

Two of the “free” transfers from the summer also get a chance to start having been rarely used for one reason or other this season. Joe Cole has missed a number of games through suspension and injury whilst Jovanovich has been left out for most of the games since he signed.

Whichever of the six outfield players on the bench Roy decides to use tonight it’s fairly safe to say that there will be a good welcome for any of them. Perhaps the two most popular changes would be for Dani Pacheco to come on – especially if it’s in his favoured central role – and of course Fernando Torres.

This has to be an opportunity for Liverpool to relax, to attack, to entertain.

2 thoughts on “Liverpool v Utrecht – No Reina, Torres on bench”