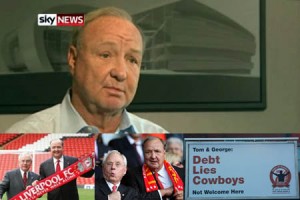 His problems began long before any “militant internet” campaigns began or even before fan groups like Spirit of Shankly were formed. He caused his own problems; his inability to see that is what allowed such campaigns to eventually help bring an end to his reign.

He’s lost a lot of money – and the attention he’s got worldwide suggests he’s got a lot more to lose, along with whatever shreds he had left of his reputation.

The following views are, obviously, not ours. This is an extract from what Tom Hicks told Sky Sports News:

“I’m shocked, devastated, frustrated. We are being very careful to make sure we follow the High Court rules but I’m very disappointed. It’s hurt my family tremendously. This very valuable asset has been swindled away from me in an epic swindle. I’m very angry about it.

“I have been working very hard to solve the issue. We know there are better owners around the world who should own Liverpool Football Club than the Boston Red Sox group [NESV]. We knew who they were and were frustrated every time we had conversations with them.

“Our desire was to have Liverpool in the hands of the right and proper next owner who could build the stadium and make Liverpool the top club in the world that it deserves to be.

“I accepted the club was going to be sold back in April, the question was when.

“The Royal Bank of Scotland wanted it done the day after and there was no reason for that. Liverpool were a very healthy financial performing club. There was a bit too much debt, no question, but we were going to fix that.

“We were frustrated by others. I think the right owner would have paid Gillett and Hicks a fair price and would have had the resources to spend on players and the stadium.

“I am angry because this was a valuable asset that has been swindled from me.

“We did have the funds available to pay off RBS in its entirety. But between RBS and the chairman and the employees that conspired against us, we could not pay off the debt.

“I know exactly why that was, they had the ability to. This was an organised conspiracy and it went on for months. It consisted of the Royal Bank of Scotland, Martin Broughton – who wanted a good PR event in his life because he’s a Chelsea fan, he’s not even a Liverpool fan – he wanted to be seen as the guy who got rid of the Americans.

“We were working very hard to solve the issue and we knew there were better owners out there than the Boston Red Sox guys.

“But the ­interested buyers were scared off by the talk from RBS and the militant internet terrorism ­campaigns by supporters.

“I just want the truth to come out in the courts.”

We look forward to it.