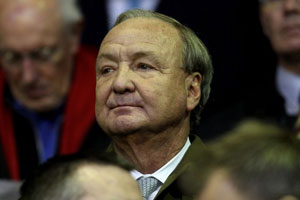 Farce has never been far from Anfield ever since Tom Hicks spoke about “Man Ham” and George Gillett suggested shovels would be in the Stanley Park ground within 60 days of their now much-regretted takeover.

And now we’re getting into what might be the final stages of their reign the bad jokes just get more and more outrageous.

Liverpool FC have, sort of, announced the sale of the club.

In fact what the official LFC statement says is that “the Board” have agreed to sell the club to New England Sports Ventures. Tom Hicks has other ideas.

It says the deal is subject to Premier League approval, which is no surprise. It also points out that legal action to block the attempt by Tom Hicks to change the board will hold the sale up. And in suitably vague fashion, it points out that “other matters” also stand in the way.

It doesn’t tell fans if, or how, they propose to fund the new stadium.

It suggests that they didn’t meet all the criteria set out by Martin Broughton when he began the sales process that should have been complete in August, rather than days before the RBS debt deadline.  They “best meet” that criteria, the statement says.

Broughton says in the statement that they’ve met them over the course of the past “several” weeks, suggesting they arrived on the scene some time after his original target of the end-of August.

The only indication of what happens to the club’s debt is the removal of “the burden of acquisition debt”. If that refers to the amount of debt related to the cost of buying the original shares it would be around £180m of the near £300m of debt the club and its parent companies were in with RBS.

The approximate £150m lent to the club by the owners’ Kop Cayman outfit – their “cash” investment as they like to call it – is unlikely to be repaid under the terms of this deal, although nothing has been said officially about that.

Tom Hicks is unlikely to even get his money back on this deal, let alone make a profit.

Not only does that mean looking closely at their abilities to fund the club properly, but how they actually intend to run it. The days of having people clueless about football in charge of the club must come to an end with its sale to new owners.

Disappointingly, but perhaps for legal reasons, nothing has been revealed about the identity of the second bidder mentioned yesterday.

The statement in full:

Liverpool Football Club today announces that the Board has agreed the sale of the Club to New England Sports Ventures (NESV).

“I am delighted that we have been able to successfully conclude the sale process which has been thorough and extensive. The Board decided to accept NESV’s proposal on the basis that it best met the criteria we set out originally for a suitable new owner. NESV’s philosophy is all about winning and they have fully demonstrated that at Red Sox.

“We’ve met them in Boston, London and Liverpool over several weeks and I am immensely impressed with what they have achieved and with their vision for Liverpool Football Club.

“By removing the burden of acquisition debt, this offer allows us to focus on investment in the team. I am only disappointed that the owners have tried everything to prevent the deal from happening and that we need to go through legal proceedings in order to complete the sale.”

The sale is conditional on Premier League approval, resolution of the dispute concerning Board membership and other matters.

This is likely to be rough ride, how long it will last remains to be seen.

20 thoughts on “LFC sale announced – but nowhere near done”