We wrote recently about a film currently in production for the new Museum of Liverpool. The new museum is nearing completion and is expected to open next year. More details of the the film will be released in due course but it will feature the exploits of Liverpool FC.

The producers are still looking for some items from the 80s, if you can provide any of them please contact us and we’ll put you in touch with the producers.

They are now looking for:

Liverpool fan hats from 80s cup finals (1986 in particular)
Any memorabilia flags / hats / badges etc from the 1986 FA Cup Final
80s LFC posters, bedlinen, or any other items that would have been in an 80s kids’ LFC bedroom.

The main item they need is a hat that is the Liverpool equivalent of the blue runners-up hate in the image below, even a plain one will be of use to them as long as it’s of the style worn to cup finals of the 80s. 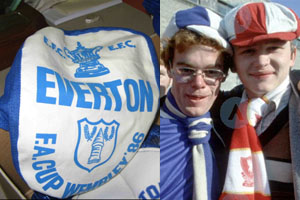