Liverpool tonight announced that 27-year-old Raul Meireles had signed for the club from FC Porto. 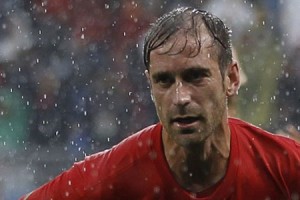 Although there is never a guarantee that a player moving to English football will reproduce the form shown in his homeland the Portuguese international midfielder is seen as a very good signing for Liverpool.

In what is a rare move the club have actually announced the fee. According to the official site he cost the club £11.5m (€14m) and has signed a 4-year-contract. No doubt the photos showing the player undergoing his “medical” will be released some time tomorrow.

With Javier Mascherano in Barcelona to finalise his move away from Anfield the attention now moves to how the club will spend the remainder of the funds raised from that sale and also the money that should still be in the infamous ‘player account’ from deals already done in 2010.

Liverpool have made a profit on transfer trading in each of the past three transfer windows and before taking the Meireles and Mascherano fees into consideration were still over £5m in profit in this window.

Reports still vary on the fee Liverpool will receive for Mascherano but the suggestion now is that the club have sold him for up to £22m.

Liverpool also allowed Alberto Aquilani to leave the club on a 12-month loan to Juventus earlier in the week. The Italian side have the option to make the deal permanent for a fee of £13.2m but even though Aquilani sees his Liverpool days as over there is no guarantee that Juventus will take the option up. That money should form part of next summer’s transfer budget, but there is an ownership situation to be resolved long before that.

The profit from this year’s winter transfer window came from the sales of Dossena, Voronin and Mihaylov. Their departures brought the club a total of £8m in transfer fees. The only new signing in that window was Maxi Rodriguez, who arrived on a Bosman.

Since then the club have signed Jovanovic and Cole on Bosman deals with Shelvey, Wilson, Poulsen and Jones being bought for a total of £10.55m. The fee for Wilson would rise substantially if he met the targets included as part of the deal, but those targets look to be some way off being met yet by a player signed for the future.

Of course the club haven’t just bought players this summer. The departures of San José, Benayoun, Martin, Riera, Cavalieri and Németh brought in a total of £15.9m in from transfer fees.

That means the club were in profit to the tune of £5.35m prior to the deals for Mascherano and Meireles. The net profit on those two deals is £10.5m, increasing the transfer profit so far this summer to £15.85m.

Add on the £8m still outstanding from the winter transfer window and the new boss should be in the position to spend £23.85m in the next three days.

It must be pointed out that every penny of that £23.85m would be from player sales. Not one penny would have been added from a share of the profits the club makes from ticket sales, TV money and commercial deals. The club made efforts to point out quietly towards the end of last season that there would be a summer transfer budget of £15m.

Add that £15m to Roy’s potential kitty of £23.85m and the new boss should be in a position to spend £38.85m on new players before that deadline on Tuesday evening.

Of course nobody expects that to happen – the club’s financial situation is not going to let that happen. But the club insist that all transfer fees received are reinvested as well as a share of club profits being thrown in every year. When reading the likely propaganda from the board later in the week about the levels of transfer spending this year don’t forget that even after signing our new Portuguese midfielder there should still be something near to £40m to spend on new signings in the next few days.

One player that Liverpool seem to be making serious attempts to sign is PSV Eindhoven’s Swedish international striker Ola Toivonen. The Dutch side are reluctant sellers of a player who has made a significant impact for his club already this season and as a result will hold out for a fee that might be beyond the means of Hodgson.

What makes it rather obvious that the ‘player account’ has a hole in it is the way Hodgson has been forced to wait for a player he has had lined up at least as long as he has been at the club.

The failure to sell Emiliano Insua has meant Hodgson resorted to using promising teenagers Lauri Dalla Valle and Alex Kacaniklic as part of the deal to bring 29-year-old left-back Paul Konchesky to Anfield in a deal said to be worth £3m. The original plan was to use the proceeds of the sale of Insua to fund the bid, but the Argentinean youngster hadn’t asked for a move and has so far been unable or unwilling to agree personal terms for any move.

Whatever unfolds over the next few days there is little doubt that Roy Hodgson is looking forward to that transfer window closing so he can get back to dealing with picking his team and working out his tactics without the distractions that come from his players waiting to see if their agent has called.

But the closure of the transfer window isn’t the only deadline looming for Liverpool on Tuesday. That’s the loose deadline Martin Broughton put onto the process to put new owners in control of the club and is also said to be a deadline for RBS to carry out more action against the current owners.