Stephen Warnock yesterday made a gesture that will live long in my memory, and I’m sure I speak for countless Liverpool fans who feel very much the same.

As he walked across the Anfield turf, carrying a floral tribute from his club Blackburn Rovers to our ninety-six victims, he was walking through an atmosphere heavy with the kind of emotions that really should never have been present inside any kind of sporting venue. 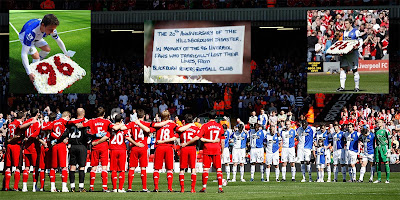 It’s always a difficult time of year. But this year the anniversary of Hillsborough somehow feels more intense.

Stephen battled back from two broken legs during his time as an Academy player for Liverpool, eventually breaking into the first team right at the beginning of Rafael Benítez’s time as Liverpool boss.

He made 67 appearances for the club but was unable to convince Benítez to make him a regular first-choice, at a time when few players could describe themselves as first-choice. His competition on the left-hand-side of the pitch included John Arne Riise, Fabio Aurelio and Mark Gonzales.

He nearly moved to Blackburn when Liverpool made an offer for Lucas Neill – he’d have been used in part-exchange – but when Lucas chose higher wages and a relegation battle over a move to Anfield that move fell through. But by then Blackburn were very interested in Warnock, and Warnock was craving regular first-team football, so it was only a matter of time before he moved there.

Perhaps if the Champions League “home-grown” quota rules had been in place at the time his career would have gone a different way and he’d have stayed at Anfield, but he is happy at Blackburn.

However, as a Liverpool player from the age of 11, he knows, understands and feels just what the anniversary means.

And the Liverpool supporters know he does.

He walked over to the Kop, and placed the tribute, a “96” made up of red flowers on a background of white flowers, in front of them. The Kop isn’t just the stand; it isn’t just the people in that stand on a particular day. The Kop has been there a long time.

And it knew what it meant that Stephen Warnock had walked over on behalf of his new club to pay tribute. He applauded the Kop, they sang his name, and another special moment had happened in the name of the ninety-six we lost.

9 thoughts on “Thanks Stephen”